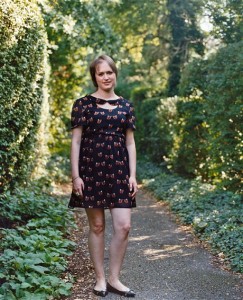 “I was a salesperson when I was diagnosed with cancer. I ate on the run. I smoked. I had no real symptoms or warning signs. One night in February 2011 I had a grand seizure while I was asleep: arms up in the air, body shaking. My partner, Pete, called an ambulance, and I was rushed to hospital, unconscious. Eventually a CT scan showed a brain tumour, which turned out to be very aggressive, anaplastic astrocytoma.

I have no memories of that time, from the night of the seizure to coming around from the eight-hour operation to remove the tumour two months later. Looking back now, I was quite naive. I thought that once the surgery was over, the tumour would be gone.

Then I needed six weeks of radiotherapy, so I did that, thinking this would make me better. It was gruelling – my hair fell out, I had quite a few seizures – then, at the end, a scan showed I still had the remnants of this very aggressive tumour. The life expectancy for people with tumours like this was 18 months.

All this time, without me knowing, Pete had been looking into things, searching, talking to anyone and everyone who could possibly help. One name kept cropping up: Dr Burzynski.

At his clinic in Houston he has developed a treatment using anti-cancer compounds he discovered and now manufactures – and is treating aggressive tumours, especially ones in the brain. He’s controversial. The medical community claims his work is unscientific and unproven.

My oncologist didn’t want me to go – he wanted to monitor the tumour and maybe give me more radiotherapy in the future. But that was like containing it, not getting rid of it, and the treatment hadn’t worked so far. Dr Burzynski seemed to be my only hope of getting rid of the cancer for good.

The treatment wasn’t cheap (about £200,000). Of course we didn’t know 100 per cent whether it would work, but I had to believe in something; I wanted to be positive. Pete launched a campaign – friends and family gathered around, held events, our local radio station supported us – and in two months we already had £100,000, enough to start treatment. I’m still so thankful for all that support.

In December 2011 I flew with Pete to the Burzynski Clinic. The medication is administered directly into your body through a Hickman line 24 hours a day. We were there for seven weeks, and scans showed that in that time the tumour had reduced by 11 per cent. I was absolutely overjoyed.

Pete and I learnt how to prepare and administer the treatment ourselves and it carried on in Britain for another 18 months. It’s not an easy option. My blood was checked twice a week, and I was scanned every six weeks at a private hospital. Most importantly, it seemed to be working. The tumour kept getting smaller, and in January this year it was all gone. I’m now off the treatment but still being monitored.

Dr Burzynski isn’t a miracle worker. There are well-publicised cases of families raising money for children to be treated at the clinic but the children still tragically dying. People have posted on our website that it doesn’t work, but I’m convinced that, if we hadn’t found him, I wouldn’t be here today.

I wouldn’t turn my back on conventional medicine, but I would advise anyone in a situation like mine to look into other options – there could always be another way. If this whole thing has taught me anything, it’s that.” A cookbook by Hannah is available at teamhannah.com